The 8th annual Connected Health Conference (formerly the mHealth Summit), provides the global platform for leadership, innovation and opportunity to achieve our new and ambitious vision of personal connected health for all. The theme is Personal Connected Health for All: Expanding Reach, Accelerating Impact.

This event is an opportunity to learn about new developments in HIV/AIDS-related research.

RSVP by October 19th to noshima@med.unc.edu

The HIV Prevention Trials Network (HPTN) announced that the final results of the HPTN 052 study were published in the New England Journal of Medicine (NEJM). This pivotal study demonstrated that antiretroviral therapy (ART) for HIV infection provides durable and reliable protection against the sexual transmission of the virus from infected men and women to their HIV-uninfected sexual partners.

The final results showed a 93 percent reduction of HIV transmission when the HIV-infected person started ART when their immune system was relatively healthy. HIV transmission from HIV-infected study participants to their partners was not observed when viral replication in the treated individual was stably suppressed by ART.

“The HPTN 052 study confirms the urgent need to treat people for HIV infection as soon as it is diagnosed to protect their health and for public health,” said Myron S. Cohen, M.D., principal investigator for HPTN 052 and director of the Institute for Global Health and Infectious Diseases at the University of North Carolina at Chapel Hill. “This study represents more than a decade of effort by a worldwide team of investigators, and the tremendous courage and generosity of more than 3,500 clinical trial participants.”

HPTN 052 began in 2005 and enrolled 1,763 HIV-serodiscordant couples – where one person was HIV infected and the other was not – at 13 sites in nine countries (Botswana, Brazil, India, Kenya, Malawi, South Africa, Thailand, the United States, and Zimbabwe). The majority of the couples were heterosexual (97 percent). HIV-infected participants were assigned at random to start ART at the beginning of the study when their immune system was relatively healthy (called the “early” arm), or later in the study when they had immune system decline (called the “delayed” arm).

In 2011, interim study results demonstrated significant benefit of early ART, with a 96 percent reduction in HIV transmission from early ART compared to delayed ART. This finding was reported based on the recommendation of the study’s data safety and monitoring board; presented at the 6th International AIDS Society (IAS) Conference on HIV Pathogenesis, Treatment and Prevention in Rome, Italy; and published in NEJM.

The HPTN 052 results have helped to galvanize a worldwide commitment to a universal “treatment as prevention” strategy for combatting the HIV/AIDS epidemic, with ART offered to all HIV-infected people, regardless of CD4 cell count.

HPTN 052 was a randomized, controlled trial designed to evaluate the effectiveness of antiretroviral therapy (ART) to prevent the sexual transmission of HIV in serodiscordant couples. The trial was conducted by the HIV Prevention Trials Network (HPTN) and funded by the U.S., National Institute of Allergy and Infectious Diseases (NIAID), part of the U.S. National Institutes of Health (NIH). Additional support was provided by the NIAID-funded AIDS Clinical Trials Group. The antiretroviral drugs used in the study were made available by Abbott Laboratories; Boehringer Ingelheim Pharmaceuticals, Inc.; Bristol-Myers Squibb; Gilead Sciences; GlaxoSmithKline; and Merck & Co., Inc. 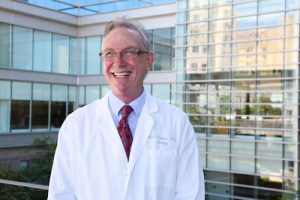 Kevin Robertson, PhD, is a professor of neurology and the director of the AIDS Neurological Center. He has led global research initiatives, and trained clinicians and researchers all over the world to establish research centers in Uganda, South Africa, Malawi, Nigeria, India, Thailand, Peru, and Zimbabwe. This summer, Robertson was recognized for his role in training the next generation of AIDS researchers across the globe by the American Psychological Association as the 2016 Distinguished Leader in Psychology and AIDS.

Robertson shared, “Even in 1987, there was a real interest in establishing an infrastructure here in infectious diseases and other disciplines. Things really took off when the Global HIV Prevention and Treatment Clinical Trials Unit was established to test the drugs that were in development and determine how effective they were.

Joe Eron led a number of those studies, and he’s just been a great collaborator and wonderful scientist and clinician and researcher. Mike Cohen has always been very supportive of my research in HIV in the brain. There’s always been really wonderful, collaborative, cutting-edge, leading scientists here at UNC doing this work. And it shows.

It shows in Mike Cohen’s work – showing that the virus can be suppressed and not transmitted to partners if you’re taking your antiretrovirals –  and Ron Swanstrom’s work. Dr. Swanstrom, who’s head of the Center for AIDS Research, and I have had a long collaboration, as well, studying virus in the brain and comparing that to systemic virus and looking for compartmentalization.” 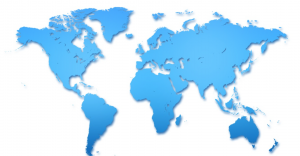 The Global HIV Prevention and Treatment Clinical Trials Unit at the University of North Carolina at Chapel Hill is dedicated to conducting and developing research of HIV infection and providing access to promising clinical protocols to persons living with and without HIV.

Click the link to see a map of where the UNC Clinical Trials Unit works around the globe, to learn more about studies that are currently enrolling, and read about the $40 million award from the National Institutes of Health for a clinical trials unit.

You are invited to join the Ending Gender Inequalities conference to:

~Enhance knowledge of evidence-based research and practice to reduce HIV, drug use, and gender-based violence

This is a profound opportunity to spotlight successful evidence-informed gender research and practice, create stronger collaborations, and advance a new action agenda.

Visit the website for more information, or email here.

This event is free and open to the public.

He has chaired numerous National Academy of Sciences committees; proposed a Framework Convention on Global Health endorsed by the UN Secretary General; served on the WHO Director’s Advisory Committee on Reforming the WHO; drafted a Model Public Health Law for WHO and the CDC; and directed the National Council of Civil Liberties and the National Association for Mental Health in the United Kingdom, where he wrote the British Mental Health Act and brought landmark cases before the European Court of Human Rights.