This story was originally posted on July 5, 2022 on the UNC School Of Medicine Newsroom website, which is linked HERE. 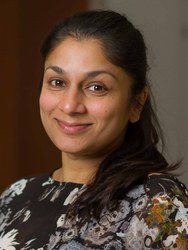 Each faculty member will receive a generous grant to be used at their discretion for biomedical research projects at the UNC School of Medicine. The researchers are now members of the Yang Family Society of Biomedical Scholars, which will host its sixth annual seminar to highlight their work later this year. The awards were made possible through donations from Yuanqing Yang, Chairman and CEO of Lenovo with additional financial support from Mr. To Hing Wu, an associate to Mr. Yang.

“We are so thankful for Mr. Yang and Mr. Wu’s generous support of the UNC School of Medicine’s biomedical research community,” said Blossom Damania, PhD, Vice Dean for Research at the UNC School of Medicine, the Boshamer Distinguished Professor of Microbiology and Immunology, and a Lineberger member. “Drs. Calabrese, Goonetilleke, and Hantman are making innovative discoveries in their respective fields, and we know further funding will help them pursue research crucial to improving human health.”

With the Yang Scholars program, the UNC School of Medicine has established a community of dedicated, promising young tenured faculty. The award recognizes faculty that have made significant scholarly contributions to their field while also receiving national recognition for their research.

Dr. Calabrese focuses on the roles of molecules called long noncoding RNAs (lncRNAs) in gene regulation – a critical component of health and disease. The human genome produces billions of nucleotides worth of RNA, yet only about 2% of it encodes for proteins. Essentially all of the remaining RNA can be classified as lncRNA, the sheer amount of which and their predominance in the nuclei of cells hints at their importance in gene regulation.

Calabrese and colleagues found that regulatory function of lncRNA can be identified computationally, providing an initial indication that recurring sequence patterns do indeed exist in lncRNAs and that scientists can identify these patterns to predict the functions of lncRNAs. His work represents a major advance towards understanding complex biological processes involving the “other 98%” of all RNAs.

His computational methods are being widely adopted by other investigators in the field, indicative of his broad impact within the scientific community.

Dr. Goonetilleke focuses on understanding how T cell immunity contributes to control of infectious diseases, vaccine-mediated immunity, immunotherapies, as well as autoimmunity. Her lab has shown that people on successful HIV therapy have a reduced response to the virus but maintain a residual response that is higher than would be expected if there were no virus. The implication is that there is enough virus production ongoing from the latent reservoir of HIV to keep the immune system active. This observation made sense of the observed fact that HIV-positive individuals experience continued immune activation despite therapy that suppresses viral replication.

Dr. Goonetilleke also found that the virus in the latent HIV reservoir is, by and large, sensitive to immune cells, showing that a person’s immune system is primed to help clear the virus. But so far, the agents used to activate the latent virus can limit the effectiveness of immune cells. She has conducted thoughtful analyses of immune cell function in the presence of latency reversing agents and is investigating interventions to better treat and potentially cure individuals with HIV.

Dr. Hantman studies brain dynamics that underlie behavior, so to better understand how those dynamics are generated and shaped. His lab focuses on “prehension” because how mammals grasp things is a learned, complex behavior that scientists think involves many regions of the central nervous system. The Hantman lab combines techniques such as circuit mapping, perturbations, and physiological recordings to study skillful movements that contribute to the major functions of the brain, such as perception and manipulation of the world.

Motor control involves many underlying brain operations and a diverse set of neural circuits. Through experimentation, Hantman and colleagues seek to identify and understand the intricate mechanisms responsible for skillful motor control, which is pertinent for human health but lost as a result of debilitating neurodegenerative diseases.

The School of Medicine will announce the date of the Yang Family Biomedical Scholars seminar and reception at a later date.